CONTRIBUTORS TO THIS BLOG

This really can't be called a gear review as much as a "Gear Praise."  After stuffing the hooded Super Down jacket in and out of packs since April and just about living in the  Super Down pants while spending time in camp this fall I can't think of a single bad thing to say about this set up.  It's certainly not the most durable outer fabric out there (I patched my pants twice in the butt) but it's not supposed to be.  It's supposed to be light, water resistant, and most importantly, warm.  Even if I have to baby these two pieces a bit, it is well worth the never ending cozy feeling I get when, as darkness settles in and the first shiver crosses my mind, I'm slipping in to my Super Down.  It's akin to putting on a warm hoody just plucked from a hot dryer. 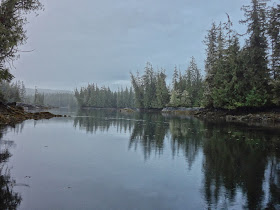 I first wore the jacket on a POW island black bear hunt.  It performed as expected under my shell; a great insulating mid layer.  But I decided to see what this waterproof down was all about.  So on a drizzly 30 minute run out to some fishing grounds, I left the Super Down jacket uncovered.  Almost amazing: the DWR kept the water droplets rolling off the entire run, but eventually from messing around in the boat and rubbing against wet stuff, the fabric on my forearms soaked through and the jacket looked a bit sad.  So no, you can't wear it alone in a driving rain storm and stay dry.  But what happened next shows how this gear and the ingredients in it really shine.  I put my rain shell back on, rode out the storm and when the sun poked out, took off my rain shell to discover that my forearms were darn near dry and puffy again.  The Quix down and the outer fabric had nearly dried just from the heat inside my own rain shell.  With the sun now beaming, it was just ten minutes and my DOWN jacket was completely dry and puffy again.  I was sold. 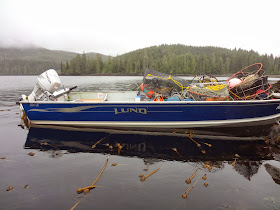 The jacket being so light and so small when compressed, it should never be left behind on any outing.  It sure came in handy on my turkey hunt in Nebraska this past spring as we chased gobblers through 6 inches of fresh snow.  As a last minute thought I stuffed my Super Down jacket into the cargo pocket of my Guide pants.  At sun up, the temperature was 6 deg.  Not ideal for hunting toms, but hunting none the less.  Adding the Super Down between two layers of wool and my Guide jacket kept me in the game, and I followed a trail of three-toed tracks right to a nice two year old gobbler. 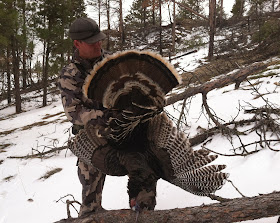 The real testing of the whole Super Down jacket/pant combo came when I traveled to interior British Columbia for work with the MeatEater crew.  Over a span of 14 days, wet conditions were guaranteed.  We spent a total of 9 days in the alpine, two on the river and the rest at the main camp.  Of 9 alpine days, two were complete tent days due to weather, two others should have been, but the will to hunt forced us out into the crap.  We did enjoy a couple magnificent blue bird days and the rest were tweeners. 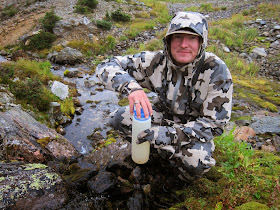 Overall, it was wet and my Super Down kit was dry.  Enough said.  Daily, both my jacket and pants were donned first thing, right out of the sleeping bag.  Taken off for the mornings ascent, back on again for any glassing session over an hour (usually on some windy, rocky ledge).  Off for more hiking and back on for the evening ritual of Jetboil stoves and Mountain House.  Oh, and they make a great pillow stuffed inside one of KUIU's wool base layers.  The ease with which the pants are put on and removed (without removing your boots) is one of their greatest features, making for quick transitions from stationary hunting/glassing to mobile hunting/hiking. 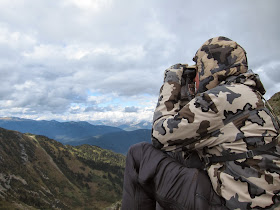 Once cloaked in the hood of the Super Down jacket, one can glass comfortably in all kinds of wind and cold.
Couple the Super Down jacket and pants with KUIU's Chugach rain gear and merino base layers, and you've got the finest, lightest backcountry hunting gear in the world.  I've at least tested it across a little bit of North America.
Janis Putelis at 10:30 PM
Share